South Park: Iraq to Control Which Armed Mercs are Allowed In 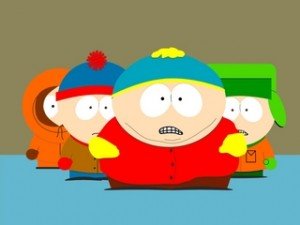 Cartman: Those bastards! Those damn Iraqis are now trying to control which armed thugs the World’s Largest Embassy (c) and other foreigners are allowed to bring in to Iraq!

Cartman: Way. See, like any other sovereign nation, Iraq is gonna start demanding that dudes who want to come live, work and carry weapons to potentially shoot Iraqis down dead have permission to enter Iraq– that’s called a visa, dumbass.

Kyle: No Kenny, you can’t help her.

Cartman: Anyway, as I was saying, before this the US could bring any thug they wanted in to Iraq, like in the Dirty Dozen movie.

Cartman: My friends at the State Department– I’m an important person there– just announced everyone now needs a visa to enter Iraq. No more free passes, even if you fly in on the State Department’s own private airplanes. They don’t roll commercial, you see. Like Snoop sez, it’s not a luxury when you really want it.

Kyle: No way, they have their own planes? Like helicopters and shit?

Cartman: Yes, Kyle, they do. They have armed helicopters. My Mom told me because the day it was announced inside State it appeared hours later in Al Kamen’s column in the Washington Post.

Stan: So wait a minute guys–

Stan: No Cartman, you ass, you wait. So if the Iraqis insist on visas, then… the Iraqis can control who enters their country. That means if they don’t want 5,500 armed mercs driving around Baghdad as “diplomats,” they can just say no? Like Japan, or Brazil or Kenya, or everywhere else on earth where the US doesn’t have its own private Embassy army operating outside of any law?

(A loud crash is heard, the boys are engulfed in flames)

Cartman: You bastards! You killed Kenny! 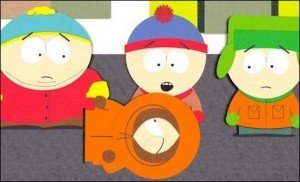 Next: Beavis and Butthead visit Baghdad…