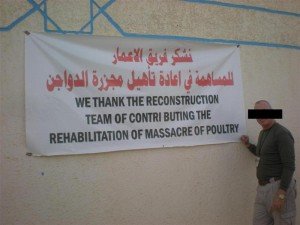 Deputy Secretary of State for Management and Resources Thomas R. Nides may have set an actual world record for the most number of ridiculously wrong claims in a single government briefing. His topic was the State Department’s presence in Iraq. Here are a few of his statements:

We have stood up a robust police-training program, which is doing a terrific job working with the local police in training and developing a program, which I think will pay enormous dividends, too.

The New York Times reported “One State Department program that is likely to be scrutinized is an ambitious program to train the Iraqi police, which is costing about $500 million this year — far less than the nearly $1 billion that the embassy originally intended to spend. The program has generated considerable skepticism within the State Department — one of the officials interviewed predicted that the program could be scrapped later this year — because of the high cost of the support staff, the inability of police advisers to leave their bases because of the volatile security situation and a lack of support by the Iraqi government.”

FYI, State Department police training is also off to a robust start in Afghanistan.

We’re working on economic development, because as you know, they’re producing almost a million two barrels a day out of Basrah.

This is pretty much the same amount of oil that Iraq has always produced, since the 1980’s. Nothing to crow about for sure.

And as I’ve pointed out at the beginning is, we’re fully and completely engaged on the political deployment.

Prime Minister Maliki has an arrest warrant pending for his own Vice President, who has fled to Kurdistan, where Maliki’s own government troops cannot touch him. Sectarian violence is on the rise. Many ministers are boycotting Parliament.

For more than one year, the security ministries have been in the hands of acting ministers – Maliki himself for interior, with close allies at defence (Dulaymi) and national security (Fayyad). Two main attempts at having them filled through parliamentary procedure (March and May 2011) both failed. One of the few likely results of the upcoming national meeting in Arbil could be the appointment of a Sadrist deputy interior minister.

State has been backing away from responsibility for the post-US military withdrawal chaos.

And principally, our goal has been to shift our reliance on contractors to basically hiring local Iraqis. This is what the Iraqis want, and quite frankly, that’s what we want because it’s cheaper.

The Embassy tried hiring Iraqis back in 2005 or so. Many could not pass security checks, and most who did start work either were gunned down outside the walls or quit after threats of violence toward them or their families. Most Iraqis who worked for the US during the Occupation are in danger, and the State Department is delaying the Special Immigrant Visas (SIVs) that would allow them to escape to the US.

We’ve had an unbelievable cooperation from the Iraqis, okay?

The New York Times reported instead that “At every turn, the Americans say, the Iraqi government has interfered with the activities of the diplomatic mission, one they grant that the Iraqis never asked for or agreed upon. Prime Minister Nuri Kamal al-Maliki’s office — and sometimes even the prime minister himself — now must approve visas for all Americans, resulting in lengthy delays. American diplomats have had trouble setting up meetings with Iraqi officials.”

The Iraqis have also objected to State’s 5,500 person mercenary army.

I think many folks thought that it was a difficult mission set and we – I think arguably – could suggest we’ve had a very successful mission… So I am – feel quite good about where we are.

OK Tom. If you’d return my calls, I would love to know how you define “successful mission.” I guess never mind about the State Department helicopter mishap or the arrest of the State Department mercenaries. And hey Tom, by the way, how’s the gravity on your home planet?

One more thing, and here’s where maybe I can help. Tom said “If I can get food purchasing – more food purchasing done in Iraq and not have to bring it in, that will dramatically decrease our dependency on contractors to do food service.” Food service is important, because there is no Baghdad Safeway open just yet for America’s robust diplomats to shop at. Indeed, some of those robusted diplomats were caught out complaining in the New York Times about food shortages at the Embassy cafeteria. One instance cited was chicken wing night, where wings were rationed at only six wings per dip.

Hey Tom, while I was a PRT Team Leader the US government spent over two million taxpayer dollars to build a chicken processing plant just outside Baghdad. The story of that plant’s failure is chronicled in my book, in a chapter called Chicken Shit, also available online. Maybe you could get the Embassy to re-reconstruct that plant to provide wings?

While the Embassy in Baghdad may lack chicken, the State Department in Washington certainly is well-stocked with Kool Aid.

Up next: Tom Nides explains how State won the war in Vietnam using flying pink unicorns.