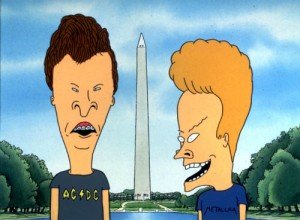 Six Republicans on the Senate Foreign Relations Committee today called on President Obama to withdraw his nominee for US ambassador to Iraq, Brett “The Stick” McGurk.

Beavis and Butthead Do “Foreign Affairs”

The Wall Street Journal has already shown it has more respect and dignity than the White House, firing/allowing to resign Gina Chon, the female half of the McGurk scandel.

The Army has also shown it has more respect and dignity than the White House, finding a Colonel who had an extra-marital affair guilty Wednesday of two charges of conduct unbecoming an officer and a gentleman, neither status McGurk seems destined for. The Army stated that the Colonel’s conduct “disgraced officers and the Army.” The State Department continues to claim McGurk is uniquely qualified for the job.

The State Department, at least with its low-level staff, has also shown it has more respect and dignity than the White House, pursuing discipline charges against Foreign Service personnel who had extra-marital affairs leading to “notoriously disgraceful conduct.”

Only the White House stands alone declaring that no one else in the entire US government, or the entire United States for that matter, is qualified to serve as ambassador to Iraq but a guy who has done nothing in is 38 years of life but be politically appointed to Iraq jobs (none earned, elected or competitively chosen, just appointed mind you), making a selfish hash out of even that by cheating on his wife while tossing nuggets to a now-disgraced reporter.

Senate Foreign Relations Committee is due to vote on McGurk’s nomination on June 19. If they pass him, his nomination goes to the full Senate for a vote sometime before hell freezes over.

Meanwhile (naughty boy voice on) White House straight man Jay Carney said “We believe that the United States will be greatly served by Mr. McGurk’s experience in Iraq, which is substantial.” Heh Heh, he said he had “substantial experience.” And we all know what that means, eh Butthead?