What Video of the Attack on Our Embassy in Yemen Reveals 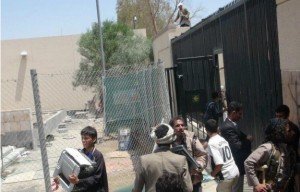 Video is afloat on the internet showing the attack on America’s Embassy in Sanaa, Yemen. Any casual look tells you this is not a good thing, but there is more on display than first meets the eye.

OK, Embassy vehicles on fire, people trying to bust through the protective glass, which actually is doing its job and taking a l-o-n-g time to give in. That’s what it is supposed to do, delay attackers to give anyone inside time to get away. Such glass, as well as Embassy doors and safes, all come with three time ratings: how long it will take an average person to bust it, how long for a determined/skilled person or persons, and how long for someone with the right tools or explosives. If it was your home’s front door, (made up numbers), the rating might be 10-5-2, ten minutes for some jerk pounding the door, five minutes for a group kicking at the hinges, and two minutes for a guy with a crowbar.

But what don’t you see? Any Yemeni cops around? Any host country forces trying to restore order? Nope. Let’s look at another clip; watch towards the end, around 0:54:

There’s the Yemeni security guy, a soldier or a cop. He’d been watching the whole time. He only fired his 20mm cannon– into the air– when the mob seemed to get too close to him. He and whatever colleagues of his were around did not intercede to stop the riot.

Most people do not know that foreign embassies and consulates are protected primarily by the host country, the local security forces. It’s that way in the US, in Tokyo, in Yemen. No country wants lots of foreign troops hanging around and that, plus diplomatic tradition, places the burden of security on the locals. US Embassies do traditionally have a US Marine detachment, but except under extraordinary circumstances, even at large embassies, that might still only be 20 or so troops armed with light weapons. They are the last ditch internal defense force, not a full spectrum defense. Almost all US Consulates, branch offices of the embassy if you will, have no US Marine presence. Like in Benghazi, Libya. When more help is needed, such as now in Tripoli, the Marines can send in a FAST team, maybe another 50 men, specially trained for embassy work.

The video shows that the Yemeni security forces either can’t, or more likely, wouldn’t, defend the US Embassy from the mob. This is bad, really bad. It could mean the Yemeni government is on the side of the mob, or, more likely, that the Yemeni government is more afraid of the mob than the US. That as far as we can tell from these videos the Yemenis stood by and let the mob ransack the Embassy is a very, very ominous sign for the future.

UPDATE: The day after the events shown above, likely under US-pressure, the Yemeni police did engage the mob, killing four. Twenty-four security force members were reported injured, as were 11 protesters, according to Yemen’s Defense Ministry, security officials and eyewitnesses. SecState Clinton said “All governments have a responsibility to protect those spaces and people, because to attack an embassy is to attack the idea that we can work together to build understanding and a better future.”

BONUS UPDATE: State Department Spokesdrone Victoria Nuland confirmed her lack of connection with reality by saying “We determined that the security at Benghazi was appropriate for what we knew.”