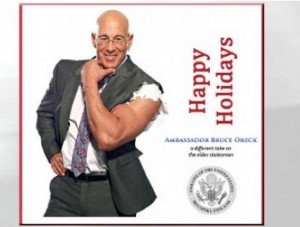 In the case of America and the U.S. Department of State, the ambassador is considered the ranking American government official in-country, the head of the embassy and indeed the president’s personal and direct representative to that foreign nation. Symbol, figurehead, molder of America’s image in the eyes of foreigners.

Many of you will remember how about this time last year we named U.S. ambassador to Finland Bruce Oreck “Douche of the Week,” a prestigious title to go along with his official one. Oreck rose to these heights by sending out Christmas cards with the photo shown to the left. Oreck fancies himself a well-built fellow, with a cheeky sense of humor. He is beloved by millions of his staff for presenting a regular guy image; he is beloved by millions of Finns for confirming their belief that Americans are complete idiots who should never be allowed to travel.

Signature Accomplishment: Renovating his Own Office

As an ambassador, Oreck’s signature accomplishment so far, not including the photo here, has been to get the U.S. government to spend more money on the U.S. embassy in Finland, because that somehow must be good for the Finns. Indeed, an official USG report acknowledged that “the embassy renovation project would not have been funded or advanced at an accelerated pace without the constant pressure of the Ambassador, both from Helsinki and during frequent trips to Washington.” Oreck picked up 250,000 frequent flier miles (ambassadors fly first class, ‘natch) in dozens of trips between Washington, D.C., and Helsinki to personally address concerns. Luckily, he was able to divert scarce State Department building and security funds from dumps like Benghazi.

Oreck of course has a long resume of living off his family’s money. Oreck earned his lifetime title of ambassador by being the son of famed vacuum cleaner manufacturer David Oreck. Ambassador Oreck then went on to serve as General Counsel and Executive Vice President for the Oreck Corporation. Oreck’s most important contribution to diplomacy was to bundle more than $500,000 in donations for Obama in the 2008 election.

We all know asshats like Oreck, and we all know they feed off of lower people like ourselves calling them asshats. Kind of perks them up, and so they go out of their way to bait us, begging for a response. As hard as I have tried not to feed him, Oreck did it again. Here’s his Christmas card for this year, as posted on his Facebook page: 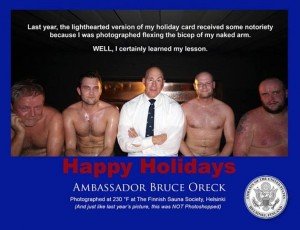 I guess it is supposed to be some kind of meta-social commentary thing, like because last year everybody called him a douche for posing with his bicep curled, this year he is wearing a shirt and tie in a place where you’d expect him to be shirtless. And it is also of course “culturally sensitive” because it is in a sauna, and Finns like saunas. As with the State Department’s goofy videos, if this kind of ambassador-with-a-sense of humor thing is such an effective “tool” of diplomacy, why is it only the U.S. that seems to have cottoned on to that?

Oreck also has on Facebook lots of “I’m not really a frustrated, closeted gay man, even though that’s cool” photos. Here he is with Richard Branson, and there is he checking out the Old Dog’s package. 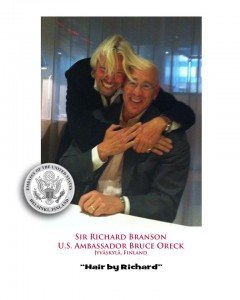 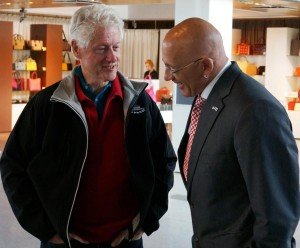 So, America, in this Christmas season, let us rejoice. Taxpayers, you are paying for all this. But in a larger sense, rest easy knowing that our bumbling idiot of a nation is in fact quite accurately represented in Finland.