When Does the Torture End? 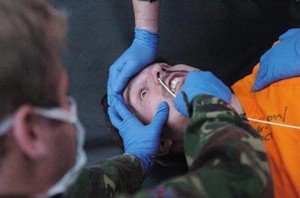 While the unfolding Constitutional crisis over the CIA’s spying on Senate staffers reviewing the torture program continues, all media accounts are quick to add to their articles a variant of the phrase that “Obama discontinued the enhanced interrogation programs soon after coming into office.”

That is not true.

Imad Abdullah Hassan has spent twelve years in Guantanamo in a cage without ever being charged with anything. A judge cleared Hassan for release, finding there was not enough incriminating evidence to justify keeping him imprisoned. Hassan’s clearance came in 2009, yet he remains at America’s off-shore penal colony without explanation or hope of release. He went on a hunger strike in protest (the U.S. military refers to it as a “long-term non-religious fast”), and is being force-fed.

Hassan is now suing the president of the United States, claiming the conditions under which he is being force-fed at Guantanamo are torture. The lawsuit Hassan filed describes his treatment:

— Prisoners are strapped to a hospital bed or special restraint chair for feeding.

— Large tubes are used, and they cause undue pain when forced into the nostrils of the prisoners. Hassan was originally force-fed with a Number 8 gauge tube, later increased to a Number 14 that barely fit as it was pushed through his nostril into his stomach.

— A funnel was used to channel large amounts of liquid into the tube to feed him faster.

— So much liquid was forced through that the second time Hassan underwent this procedure, he lost consciousness and spent two days in critical condition.

— Prisoners were force-fed drugs causing them to defecate on themselves as they sat in the chair being fed. “People with hemorrhoids would leave blood on the chair and the linens would not always be changed before the next feeding,” said Hassan in the lawsuit.

— Prisoners would be be strapped down on top of others’ stool and blood for up to two hours at a time.

— Hassan was at times forcibly sedated so he could be force-fed more easily.

— If Hassan vomited on himself at any time during the procedure, the force-feeding would restart from the beginning.

— Guards took Hassan and two others to another prison block so that others would see what was being done to them, as a deterrent.

— Air-conditioning was sometimes turned up and detainees were deprived of a blanket. This was particularly difficult for the hunger strikers, as they felt the cold more than someone who was eating.

— The force-feeding procedures described in the lawsuit were done twice a day, every day, on prisoners.

— Even after Hassan broke down at one point and began eating again, he continued to be force-fed anyway.

— Hassan’s recorded weight fell from 119 pounds to 78 pounds. The military, in its force-feeding manual, states “Patients with weight loss can be expected in any detained population.” The manual advises “When detainees are weighed… wearing shackles or other restrictive devices, the weight of those devices will be subtracted from the measured weight.”

— Hassan has been force-fed in this manner for eight years.

Why Doesn’t He Just Eat?

At this point some will be asking: why doesn’t Hassan just eat? That would stop the force-feeding torture.

It is likely Hassan himself has thought about the same question. In my former career working for the Department of State, I was responsible for the welfare of arrested Americans abroad. Many threatened hunger strikes for reasons ranging from superficial to very serious. However, in my 24 years of such work, only one prisoner carried it out for more than a day or two, taking only small sips of water for days. His captors, one of America’s allies in Asia, choose to not force-feed him, stating due to the nature of his political crime that they’d prefer to see him die.

I watched the man deteriorate before my eyes, starving to death in real-time. It requires extraordinary will and strength to do that, pushing back against all of evolution and biology screaming inside your head to just eat. Close to death, the man choose to stay alive and eat for the sake of his family. It is no casual decision to do what Hassan is doing. Something very important must be at stake for a man to do what Hassan has done.

And of course Hassan was still force-fed at one point when he did start eating. Imprisoned wrongly in the first place, and cleared to leave Gitmo for the last five years but still locked up, Hassan is worthy of protesting his incarceration via the only means available to him. He also understands that the force-feeding is not about keeping him alive per se, but about forcing him and others to comply with his jailers.

The procedures at Guantanamo (as well as at the CIA Black Sites) are performed by or supervised by U.S. military and CIA doctors who, though they had taken the Hippocratic Oath to do no harm to a patient, do anyway.

The Institute on Medicine as a Profession (IMAP) issued a lengthy study on the abandonment of millennia-old medical ethics in the post-9/11 U.S. torture programs. IMAP is a respected source of ethical comment; its board members include physicians from Columbia University, Harvard, the University of Toronto, Johns Hopkins, Boston University and a number of other prominent hospitals and medical research facilities. These are non-political, dispassionate people whose work has ended up as political under the extraordinary circumstances of our world.

IMAP produced a report entitled Ethics Abandoned: Medical Professionalism and Detainee Abuse in the War on Terror, based on two years of review of public records. The report details how military and CIA policies institutionalized a variety of acts by military and intelligence agency doctors and psychologists that breached ethical standards. These include:

— Consulting on conditions of confinement to increase the disorientation and anxiety of detainees;

In addition, IMAP says that military policies and practices impeded the ability to provide detainees with appropriate medical care and to report abuses against detainees under recognized international standards. The report explains how agencies facilitated these practices by adopting rules for military and CIA health personnel that substantially deviate from ethical standards traditionally applied. For example, violations of ethical standards were “excused” by designating health professionals not as doctors, but as “interrogation safety officers,” personnel not bound by any ethics.

The basis of medical ethics, the Hippocratic Oath which says “first, do no harm,” is understood in the real world to come into conflict with the demands on doctors in wartime. Such complicated circumstances have been dealt with, and evolved standards do exist. Here are some from a recognized international body:

Voluntary consent of the human subject is absolutely essential. This means that the person involved should have legal capacity to give consent; should be so situated as to be able to exercise free power of choice, without the intervention of any element of force, fraud, deceit, duress, over-reaching, or other ulterior form of constraint or coercion; and should have sufficient knowledge and comprehension of the elements of the subject matter involved as to enable him to make an understanding and enlightened decision… [procedures] should be so conducted as to avoid all unnecessary physical and mental suffering and injury… proper preparations should be made and adequate facilities provided to protect the experimental subject against even remote possibilities of injury, disability, or death.

These standards were written in 1947 in Nuremberg, Germany, to guide future medical experimentation on human beings held captive. The authors were Americans sitting in judgment of 23 Nazi physicians accused of murder and torture in the concentration camps. Of course many will argue circumstances in Dachau and Guantanamo are different; this is true. The former was run by the Third Reich and the latter by the World’s Indispensable Nation.

It is like I’ve had a bad dream and awoken to remember it all.

As pundits falsely applaud the end of the U.S.’ torture regime following the election of Barack Obama, one should spare a thought for those 154 people still in Guantanamo who still endure America’s pointless wrath. The irony that the same president who said he ended torture also said he would close Guantanamo once in office is noted, but is really not much more than another spot on the white wall we imagine we are as a nation.

Why do we do it? The doctors who conduct the torture are not stupid, especially evil as we traditionally define it, or unaware of the ethics of their profession. They know as well as anyone Hassan is approved for release, and so even any piggish notions of revenge or pay back do not apply. Some of the doctors involved were likely in junior school when 9/11 happened and know about that day the same way they know about Gettysburg or the Battle of the Bulge.

We might also remind ourselves that after their military careers, some of those same young doctors will move among us in private practice, perhaps holding their dark secrets inside, perhaps enjoying them a bit too much in private moments.

I don’t know why they do it. They’ll say, perhaps to themselves in some death-bed moment of desperate remorse, that they were only following orders. One hopes their god is more understanding, because we here have heard that one before.