I Wonder What Dr. King Would Say 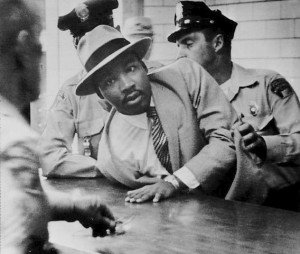 There will be many, many articles today speculating what Dr. Martin Luther King would say about this event or that. There is much to talk about — the ongoing police killings of young black men, crippling economic inequality that helps keep Blacks in poverty, the use of gerrymandering and election day tricks to disenfranchise African-Americans, the fact that we disproportionately imprison Black men — the list is a long one.

Dr. King’s most powerful message revolved around freedom. Freedom for Blacks, freedom for whites, freedom for Americans, freedom. Writing from jail, in his famous letter from Birmingham, King said “Injustice anywhere is a threat to justice everywhere.” King was rightly focused primarily on the injustices of segregation. But his concept of freedom extended far beyond simply race. He understood the word in the broadest possible sense, and so I’ll add one more article to the stack today putting words into Dr. King’s mouth, seeking to bring his message forward.


Following a singular day — one day — of terror attacks, we set fire to the whole world. Willingly, almost gleefully, we invaded Afghanistan and Iraq, the former on the promise of bloody revenge and the latter based on flimsy falsehoods that today seem as real as childhood beliefs. We reinvaded Iraq in 2014, and brought war to many other places. But we want to believe and so it is easy to lie to us.

Worse yet, we turned on ourselves. With a stroke of a pen, we did away with 226 some years of bitterly fought for civil rights — silence the First Amendment and do away with critics and whistleblowers, cow journalists and use the police to break up the peaceful assembly of citizens seeking to address their government, rip open the Fourth Amendment and allow the government to spy into our lives. Plumbing for the depths of evil, we as a nation tortured men, created an archipelago of secret prisons and make excuses to keep them still open, build a regime of indefinite confinement and rendition to feed our concentration camps, hungering for flesh. When even that was not enough, we unleashed death from the sky, smiting people who bothered us, maybe occasionally threatened us, often times simply people who were nearby or looked like our possible enemies. In the calculus of the day, we kill them all without a concern that any deity would sort the bodies out later. How much would be enough for revenge?

That our nation can be both vengeful and impersonal at the same time horrifies. I wonder what Dr. King would say.


We thought we had a chance at change in 2008 but instead were proven again to be just dupes and amateurs. He could have turned it all around, in those first weeks he could have asked the rivers to flow backwards and they just might have. He could have grounded the drones, torn up the Patriot Act, held truth commissions to bring into the light our tortures, re-emancipated America in ways not unlike Lincoln did in the 1860s. Slam shut the gates of Guantanamo, close the secret prisons that even today still ooze pus in Afghanistan, stop the militarization of Africa, bring the troops home, all of it, just have done it. What a change, what a path forward, what a rebirth for an America who had lost her way so perilously.

One man could have made a difference and when he did not even try, he helped solidify in America a sense of cynicism and powerlessness that empowers evil people further. I wonder what Dr. King would say.


Today, this day, we are left with only ironic references to where we were and what we had been. We now today go through the motions of a celebratory day like an old married couple dutifully maintaining civility where joyous lust once was. We are raising a new generation who accept that their nation tortures, invades, violates and assassinates, all necessary evils requiring us to defame democracy while pretending to protect it.

On this same day we celebrate the legacy of Dr. Martin Luther King, who wrote to us all from a jail cell in sweltering Birmingham. King’s guidance in that letter was that the “means we use must be as pure as the ends we seek.”

We cannot fight wrongs by committing wrongs. For what noble crusade do we allow the torturers to walk free? To claim the right to kill people, even Americans, anywhere in the world simply because we can do so? Why do we prolong wars, long ago not just lost but rendered pointless, in Afghanistan and Iraq and elsewhere? For what crusade do we keep our enemies in Guantanamo? These are the features and questions of Post-Constitutional America. I wonder what Dr. King would say.


I’ve been accused of over-romanticizing America’s Constitutional Era, 1789-9/11/2001. Indeed, didn’t the worst of the abuses Dr. King fought against take place during that time, as King described them “vicious mobs lynch your mothers and fathers at will and drown your sisters and brothers at whim; when you have seen hate-filled policemen curse, kick, brutalize, and even kill your black brothers and sisters with impunity.”

The horrors ranged from those depths to the smallest of examples; again, from Birmingham, King wrote “when you suddenly find your tongue twisted and your speech stammering as you seek to explain to your six-year-old daughter why she cannot go to the public amusement park that has just been advertised on television, and see tears welling up in her little eyes when she is told that Funtown is closed to colored children, and see the depressing clouds of inferiority begin to form in her little mental sky, and see her begin to distort her little personality by unconsciously developing a bitterness toward white people.”

America’s Constitutional Era was grossly imperfect. Yet for its obvious failings, there was a sense of the possibility of progress; halting, awkward, unfinished, but, well, for lack of a better word and to use a word that has become a symbol of modern times’ irony, hope. Dr. King believed in hope, and indeed based the soul of his movement on it — things could be made better, saying “If the inexpressible cruelties of slavery could not stop us, the opposition we now face will surely fail.”