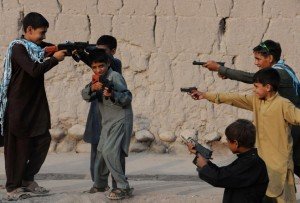 This one’s so funny that it must be some kind of U.S.-led initiative; I can’t believe the Afghans have this kind of a sense of humor.


But whatever the origin, Afghanistan banned the sale of imitation Kalashnikovs and other toy guns after they caused injuries to more than 100 people during the last Eid celebrations. Children toting toy guns that fire rubber or plastic pellets are a common sight in the country during Eid al-Fitr, with sales surging every year amid festivities marking the end of Ramadan.

More than 100 children and teenagers suffered eye injuries during the last round of celebrations, the interior ministry said. “We have ordered police forces to confiscate all toy guns which can lead to physical and psychological damage among people,” a ministry statement said.

Now of course the hilarity is that Afghanistan remains one of the most heavily-armed places on earth. It is more than likely that every kid with a toy gun either has his own AK at home, or lives in a house with a real AK (or two, or four…) Meanwhile, the countryside is strewn with land mines dating back to the British 19th century defeat, buried under Soviet mines from the 1980s, buried under American munitions of more recent vintage. Car bombs are not infrequent interruptions to Taliban firefights and if none of that puts a kid’s eye out, there are always “accidental” U.S. drone strikes to help paint the landscape with Afghan kid splat.

Nonetheless, while the Afghan government can do nothing about any of that, it does claim it wants to reduce the influence of war toys on impressionable young minds.

But every action has a consequence. The toy gun ban, if vigorously enforced by the lazy, corrupt Afghan police who can’t stop car bombs, never mind plastic guns, would impact the booming toy business in the country. That, along with opium production, are possibly the last two for-profit enterprises functioning in Afghanistan.

The ban follows an earlier increase on import tax for toy guns from 10 percent to 50 percent to discourage it. The move could lead to an emergence of adults’ black markets and smuggling networks for children’s toys, the Interior Ministry warned. That situation will then mirror the lucrative black market for real firearms. Hey kids, just like daddy!

According to the AFP news agency, the toy gun ban was widely welcomed on social media, with some calling for extending the crackdown to include sales of real weapons in the war-torn country. “This is a positive step that will stop children from taking up real arms when they grow up,” one Afghani wrote on Facebook. “Militancy and war has promoted a brutal culture of violence in our society that is impacting children.”

Like I said, those wacky Afghans. Who knew after centuries of war against foreign invaders they still have their sense of humor?