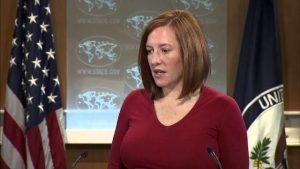 Last week the State Department revealed that an unknown official within its public affairs office ordered the scrubbing of roughly eight minutes from a video of a State press briefing, which included a discussion about negotiations related to the Iran nuclear deal.


In the deleted portion, then-spokesperson Jen Psaki (above) was asked whether her predecessor lied when she said secret bilateral talks with Iran had not yet begun, when later U.S. officials said they were already ongoing at that point.

A few days later, after the news broke of the deletion, Secretary of State John Kerry said that whoever called for deleting the several minutes of video was being “stupid, clumsy and inappropriate.” Kerry emphasized that he intends to find out who was responsible, adding that he didn’t want someone like that working for him.

No One is Responsible

However, on the same day Kerry issued his intention to find the responsible person, the current State Department spokesperson Mark Toner said the investigation to determine who ordered portions deleted from a video was over.

“We believe we have conducted an inquiry into this incident,” Toner told reporters. “We have exhausted our efforts to look into the incident and responsibility.”

According to State, the investigation learned that the technician who made the cut from the YouTube video did so on orders from someone in the public affairs office, but that no one remembered who. Despite no one remembering who gave the order, State was clear that its investigation ruled out former spokeswoman Jen Psaki.

Toner also added in his briefing to reporters that there was no rule or regulation barring such editing, and it was thus allowed. Toner’s statement mirrors almost exactly the language Hillary Clinton has used to justify her use of a private email server while Secretary of State.

When the editing was first uncovered by a journalist at Fox News, the State Department blamed the missing minutes on a technical “glitch.”

We have become all-too-used to government lies; they are now expected and quickly dismissed as business as usual. Still, State’s actions deserve special note for their utter contemptuous nature.

To begin, the deletion was actually not that big of a deal. The statements cut out were made in 2013, and the video itself was buried on YouTube. The events have passed, and the false statement could have easily be brushed away as necessary during secret negotiations. In the broad scope of things, they really didn’t matter, yet State felt compelled to hide them anyway. Even the hiding was crude, a simple edit of an event witnessed by a room full of journalists. Not exactly subterfuge.

That contempt was carried forward into 2016, when State tried to blow the whole affair off by claiming it was a technical glitch. When they got caught in the lie, the next step was a faux-investigation that revealed nothing, except to purport to clear the senior person involved in the mess and the one who presumably had the most to gain from the deletion (Psaki now works in the White House.)

The State Department then doubled-down with new lies, allowing Secretary Kerry to demand resolution while simultaneously announcing the issue is closed and no further “resolution” is going to happen, absent a Congressional inquiry that will no doubt be stymied by slow responses from State and cries that it is all just another political attack by the Republicans.

Any of this sound familiar?

BONUS: The White House was also caught this week deleting an embarrassing line from the official transcript of a press briefing on the same topic. Probably just a coincidence…