Destroying Fallujah to ‘Save It’ 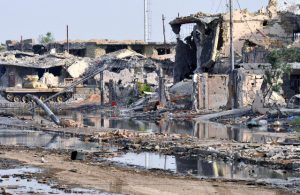 One of the concepts that emerged from the Vietnam War was that of destroying a village to save it.

The idea was that by leveling a place where people once lived, the area would be denied to the Viet Cong. The people? Well, they’d just have to find somewhere else. And you’re welcome, for your freedom!

The same cynical policy seems very much underway now in Iraq, in the U.S.-led campaign against Islamic State.

The current focus is on the city of Fallujah. During Iraq War 2.0, the United States captured the city twice, the final time via a siege that would have embarrassed the Nazis outside Stalingrad. White phosphorus and depleted uranium weapons were used against a civilian population living amidst some groups of Sunni militias and al Qaeda terrorists. No one knows the civilian death count.

In Iraq War 3.0, 2016 edition, beleaguered Iraqi Prime Minister Haider al-Abadi was quick to declare victory in mid-June after Shia militias reached the center of Fallujah, displacing the Islamic State (an official in the U.S.-led coalition said Iraqi forces had so far taken only half of Fallujah, but why does that matter.)

Whomever is winning, the fighting has forced more than 85,000 residents to flee in a humanitarian crisis you’ll need to work hard to learn more about. One of the few Western journalists actually on the ground in Fallujah, the Washington Post’s Loveday Morris (follow her at @LovedayM if you have any interest in Iraq at all), described the scene as “No tents, latrines, water tanks for some. Aid agencies just can’t keep up. In 4.5 years covering Syria and Iraq I’ve never seen conditions this bad… No words.”

It will be years, if ever, before Fallujah is a functioning city again. How do we know? Because of Ramadi.

Ramadi was the city before Fallujah that was destroyed to free it from Islamic State. Some six months after that victory, the city remains a disaster zone. Estimates are that almost 80 percent of the buildings in Ramadi, including the majority of around 32,000 residential housing units, infrastructure, government departments and schools, have been damaged or destroyed. ISIS did its share of damage, but the U.S. launched thousands of airstrikes, artillery barrages and rocket attacks into the urban areas. Shia militias did the rest.

Special engineering committees were created to assess the damages, award compensation and schedule re-building. Forms are still being given out to members of the public who venture back into the ruins. According to local administrators, around $19.5 billion will be needed to rebuild the city.

Since the committees started work in May, they have received around 17,000 applications for compensation, says the mayor of Ramadi. About 50,000 are expected. Staff have managed to process 3,000 applications so far and have made the required site visits at a rate of only 30 and 50 per day.

So far, the Baghdad central government has only provided about one million dollars. That’s Ramadi. Fallujah awaits.