The Russians, Trump and the Deep State (Rising) 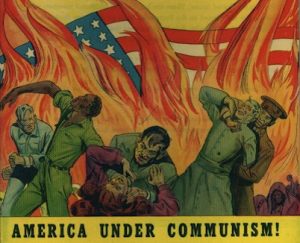 I want to scare the hell out of you.

People talk of the Deep State, a kind of shorthand to refer to the entrenched parts of the government, particularly inside the military, intelligence, and security communities, who don’t come and go with election cycles. The information they hold, and their longevity, allows them to significantly influence, perhaps control, the big picture decisions that change the way America works on a global scale. Who the enemies are, where the power needs to be applied, which wars will start and what governments should fall.

One of the features of the Deep State is that it prefers to work behind the scenes, in the shadows if you like. The big name politicians are out front, smiling for the cameras, and the lesser pols have to tend to the day-to-day stuff of government. The Deep State doesn’t trouble itself with regulating agriculture or deciding which infrastructure bill to fund. That is in large part why there will never be a full-on coup; why would the Deep State want to take on responsibility for the Department of Transportation?

When the Deep State does accidentally expose itself, it is often by accident, such as in the panic right after 9/11 when the president was sitting around reading a children’s book while Cheney, Rice, and Rumsfeld were calling the shots. Same for in the 1980s when a set of cock-ups exposed U.S. arms sales to Iran to pay for U.S. proxy forces in Central America while with U.S. support the Saudis paid for jihadists to fight in Afghanistan, laying the early groundwork for what would become the War on Terror.

Forget what you “agree” with, and focus on what happened. In July the FBI exonerated Hillary Clinton of any wrongdoing in connection with her private email server. Yep, there was highly classified material, but that didn’t matter. Nope, the Russians and/or everybody else never hacked into her server, and nobody on her staff ever clicked Podesta-like on a phishing link. Nothing to see here. And then in October the FBI swung again and said well maybe there was something to see, buried conveniently on known-idiot Anthony Weiner’s laptop already in their possession. Funny about that. Anybody seen once marked-to-go places Huma Abedin lately?

As for the CIA, they managed to leak like Grandpa’s adult diapers throughout the campaign that Trump and Putin… something. Trump owes money to Russia. Trump’s computers communicate with Russia. Trump’s advisors work for Russia. Trump wants to build hotels in Russia. When none of that really stuck, it turned out the hacks into the DNC servers were done by Russians — in cahoots with arch-villian Julian Assange — ordered personally by Putin to elect Trump. All because Trump was Putin’s stooge, as the argument completed its circle.

UPDATE: When last week’s intelligence community report that “proved” the Russians did the DNC hack failed to really do much past a news cycle or two, it should be no surprise at all that this week a leak dropped on CNN that the Russians may have “compromising material” on Trump. Now, that leak supposedly came from anonymous sources from a classified synopsis included in a version of last week’s report that was based on allegation made public in the summer but only very recently “confirmed” by a former British intelligence officer who worked privately doing opposition research for an unnamed Trump Republican opponent.

If Trump could not be defeated, he would be delegitimized. Overnight the left/liberals/progressives/whatever turned into red-blooded supporters of the CIA and 21st century Cold Warriors, with anyone from that one asshole on Facebook you argue with to Pulitzer-prize winning journalists who disagree, labeled as Russian stooges, spies, fellow travelers and the like.

The result? A new Cold War, sold to the American people over the course of about a month.

When the Soviet Union collapsed and the old Cold War wrapped up, there was left a gaping hole for the Deep State. They nearly literally had nothing to do. Budgets were being cut, power in Washington defused. 9/11 was a helpful and timely accident; the War on Terror would provide the much-needed Cause to blow up spending and reconstruct status and power.

And the War on Terror started off with great promise for the Deep State, dovetailing nicely with long-sought Conservative projects such as remaking the Middle East and controlling the Persian Gulf. The future was wide open, Afghanistan a stupid but necessary prelude to the real first act in Iraq.

But despite the power of the Deep State, mistakes are made and nature finds a way. The War on Terror became a global clusterf*ck. Failures accumulated: Iraq and Afghanistan, of course. Libya, Syria, the messy Arab Spring, relations with Pakistan. You can’t really trust any of those folks to get it, we want a war that doesn’t end but looks good. Beheadings on TV simply stir people up at home and there is not much we can do about them.

Now, to be fair to the War on Terror, it had a good run. It normalized domestic spying and the omni-presence of security everywhere in America, and set up a nice bureaucracy to manage all that in Homeland Security. It got Americans used to see armed military, and militarized cops, on the streets.

But what was needed was a global struggle that made us look like we were winning without it ever ending.

If only there was some sort of model for that…

The Russians. Every American fear rolled into one guy, Putin, who might as well come from a Hollywood super-villian workshop. Unlike messy terrorists, who wanted, whatever, Sharia or a Caliphate, damn foreign words, Russia wanted old-fashioned territory, stuff on maps like Crimea and the Ukraine that mattered not a whit to America, but could be played domestically as Struggles for Freedom (C). The Russkies had troops with actual uniforms, and all the old propaganda materials were laying around. The Russians also knew how to play ball, blasting back through their RT and Sputnik channels nobody really watches but are right there to label as threats to our democracy. The Russian version of the Deep State knows a good deal when they see one, too.

Clinton was the perfect figurehead, already warm friends with one of the last dessicated Cold Warriors, Henry Kissinger, and already more than predisposed to cast the Russians into their role. Trump, well, he didn’t seem to get it, and, when it was becoming clearer he might win, he needed to be made to get it. The Deep State appeared to have some internal dissension; that publicly popped up when it appeared the FBI and CIA were not sure which horse to back in the latter days of the campaign and how to do it. Hey, mistakes were made, sorry, even the Deep State is kinda human.

Well, it was messy and dragged on past the actual election, but everything is settled now. The intelligence report that just came out made things clear: Russia is the bad guy, Trump now the cuck of the Deep State, things are back to “normal.” Funding will pour into the military, intelligence, and security communities. Since the war will be a cold one, the U.S. can declare periodic victories just like in the old days over things like the Olympics, chess matches, dissidents saved, spy stuff We Can’t Tell You About but will leak out anyway. We can have proxy wars and skirmishes that seem like huge deals but can usually be managed in scope. Any troublemakers at home, in or out of the White House, can be labeled Russian sympathizers on CNN and Maddow and dealt away quickly.

Overall, the 1950s weren’t that bad now were they?

BONUS: One currently outstanding question is whether the manipulations of the Deep State in our election became public by accident, such as after 9/11, or whether someone (us? Trump? Putin?) was meant to see them for some purpose. Hang on to that question.

MORE BONUS: Yes, yes, this is all conspiracy nonsense. The moon landings were faked and 9/11 was an inside job by the Mossad. There is no Deep State, or Trump really is a Russian Manchurian candidate, or the spiders from Mars are actually pulling the strings or I am reading those weird Geocities-like websites for preppers and soon will be posting cheesy animated GIFs of flags waving, whatever. I’m also a Russian, or Edward Snowden, or being paid by someone to write this. Whatever you need to tell yourself, and you should never believe what I say and say how sad it is that this is what I’ve come too. I’ll kill a puppy in your honor. Thanks!