The Russians Only Mattered Because Hillary Lost 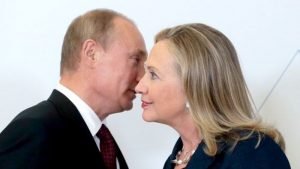 I’m going to ask you to try a thought experiment.

Shut off the part of your mind that thinks Trump is bad (or good) and focus instead on the process in America that brought us to the present state of affairs. Because what unfolded in America is bigger than Trump, and will survive Trump to influence the next presidential election, and the one after that, and…

— Bill Clinton met with then-Attorney General Loretta Lynch on June 27, 2016. Days later, on July 5, Lynch’s subordinate, FBI Director James Comey, announced candidate Hillary Clinton was not under investigation for security violations relating to her personal email server, extraordinary financial contributions by foreign governments to the Clinton Foundation many saw as quid pro quo, or anything else. Clinton is then nominated, with the last barrier to her move into the White House, the possibility of indictment, removed on schedule. Timing and coincidence are everything it seems.

— According to the Washington Post, in late summer 2016 the CIA presented Obama with evidence that Russia, on Putin’s personal orders, was trying to influence the U.S. election. The accusations were the country obtained emails showing the Democratic National Committee (DNC) heavily favored Clinton over Sanders. The Russians also used social media to push a number of stories about Clinton that were false/exaggerated/true but negative.

— According to the Post, so as not to appear to be supporting Trump, who at this same time was publicly stating the election was rigged against him, Obama did nothing regarding the Russian activities beyond allegedly telling Putin to stop doing them. This was largely predicated on the certainty that Clinton was going to win in November.

— The DNC refused DHS/FBI cyber security assistance. The DNC did not allow DHS/FBI to physically inspect its computer hardware.

The state of things as of late summer-early autumn 2016 was that Russia activities were just not that big of a deal. Clinton seemed comfortably headed to the White House. If this was a crisis, nobody acted like it.

The Russians’ activities at the worst consisted of those DNC emails and social media. The DNC emails’ primary content seemed to be confirmation that the organization favored Clinton over Sanders, not exactly news to Sanders’ supporters.

Social media, the other side to Russia’s efforts, is confirmational; it tends to reach people who already believe what they are reading. Much of the Russian influence on the election was ascribed to RT.com, the Russian cable television channel. RT has very limited viewership among American households and arguably limited credibility among American voters. Quick now — what channel is RT on your cable box?

The November election approached. Obama took no significant action. Democrats didn’t balk until November 1, almost a month after the information became publicly known, and only as polls started to show Trump pulling ahead. Hillary lost.

A whole-of-government effort nearly immediately unfolded to overturn the election.

Recounts were called for amid allegations of vote tampering. Constitutional scholars proposed various Electoral College wishful-thinking scenarios to unseat Trump. Lawsuits were filed claiming the hereto-largely unheard of Emoluments Clause made it illegal for Trump to even assume office. Leaks begin pouring out, focused on information sourced from signals intercept material available only to limited persons inside the intelligence community (IC), implying the Trump campaign worked with the Russian government.

Serious people in the United States government claimed outright the person elected president was a Russian agent, placed in the White House to follow instructions from Moscow. His very presence in the Oval Office was a treasonous act.

The American mainstream media reset itself to the goal of enabling the impeachment of the president, spinning up the process even before Trump took the oath of office. It is now a rare day when the top stories are not bombastic accusations, based on a whole litany of anonymous sources, so-called reports, according to people familiar withs, government officials who have seen the documents, and so forth. No bit of gossip is too small, no accusation too grand, and it is all presented unsourced, rocketed from Rawstory to HuffPo to the New York Times in the morning, the other way around for the scoop-of-the-day in the afternoon.

What was largely ignored by the White House in the summer of 2016 on the assumption Clinton would win became in the autumn after she lost, in the words of the Washington Post, “in political terms, Russia’s interference was the crime of the century, an unprecedented and largely successful destabilizing attack on American democracy.”

In other words, whatever the Russians did only mattered and only was a crime because it contributed to Clinton’s loss. The hacking itself is immaterial; what matters is the way it affected the White House’s and media’s favored candidate.

Only after Clinton lost did it become necessary to demonize the Russian threat and create a crisis that might be inflated big enough to justify impeachment.

Even among intelligent people well-versed in how government really works the thinking seems to be “well, it’s justified to get rid of Trump.”

Trump is a terrible president. It is unlikely the United States will be a better place four years from now. But the problem isn’t so much Trump as it is the longer game. We’ve had crappy presidents before and mumbled through.

Try as hard as you can to forget Trump is, well, Trump. Focus instead on the sheer amount of high-level manipulation, collusion if you will to use a popular term, involved in the recent election. What role did the FBI and the intelligence community play in the election? Why did they play any role at all? Why did the White House take little-to-know action against Russia, and shield what they knew from the American people, as long as their favored candidate was in the lead? What role is the media playing now in fanning the flames? Name a media source you consider impartial anymore.

What is the broader significance of a relative minority of people inside government and the media seeking to overturn the results of an election?