Hiroshima and the Scar of Moral Injury 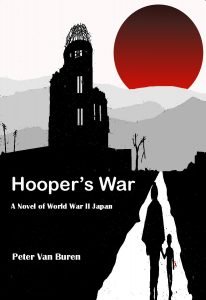 For military historians, walking a battlefield is a special experience. That’s where things previously locked away in books happened, the hill that blocked an advance, the river that defended an important city and altered the course of human history. Historians visit Waterloo, Gettysburg, and Normandy all the time.

Things work differently for those interested in the final days of World War II. Absent the bloody struggle for Okinawa, the real end days of the war were conducted from the air. The firebombing of Tokyo in March 1945, the greatest civilian loss of life in a conventional air raid, left no signs some 70 years later in the modern city. There is nothing to indicate a million people were left homeless because one-fourth of the urban area was destroyed. And that is exactly as the Japanese want it. It was all cleaned up, buried, as if it never had happened.

The only indication in Tokyo that any war at all took place is tucked away in the Yushukan War Memorial Museum. Attached to the controversial Yasukuni Shrine, where the souls of Japan’s war dead reside (including some who committed war crimes), Yushukan is in its own way a marker of things cleaned up and things buried. The building houses carefully curated artifacts from the war. The choices speak of things almost no Japanese person, and few Japanese textbooks, will otherwise talk about.

There’s a locomotive from Burma, the rail line it traveled constructed by slave labor (as shown in part in the movie Bridge Over the River Kwai). It is not a symbol of shame, however, like the locomotives displayed elsewhere in the world that pulled train cars into Auschwitz, but a point of pride: Japan brought modern train service to the jungle. Also in the museum is a kaiten, a human-guided, suicide torpedo. Not a symbol of the madness of war, but one of martial spirit. There’s an aircraft like one that bombed Pearl Harbor. A video shown claims Japanese forces were liberating Asia from western colonialism and that Japan’s troops were warmly welcomed into Manchuria. Located inside the stigmatized Yasukuni Shrine grounds, the museum is almost purposely not easily visited. Certainly not by foreign tourists or young people out for day’s entertainment.

Otherwise, there is little to see, even less to experience, of the war, all across the country. Small towns lack the plaques and displays to the fallen you see in rural America, and certainly nowhere is there evidence of the self-reflection one sees across Germany. Elsewhere, the museum and peace monument at Nagasaki are small, a bit out of the way and well, tatty around the edges. There’s almost nothing of a world war in Japan.

Hiroshima is the place that has not been buried, the place not allowed to heal fully. The Peace Park and Museum at Hiroshima were created for the Japanese as a symbol of their victimhood, but they end up, against all plans, exposing raw edges of a war everyone otherwise wanted to go away.

No matter how many times I went, I always expected something different to happen, when in fact nothing happened. There were 200,000 souls out there. I couldn’t see them for the crowds of people pushing into the station, and I couldn’t hear them over the traffic noise, but past lives lingered. It couldn’t be helped. No matter how much concrete and paving had been laid down, it could not have been enough. History runs very deep in Hiroshima.

Even if you have never been to the place, you know the place. The mountains that form the background in all the old photos are still backstopping the city. A lot of newer, tall buildings now, but the Ota River delta, where thousands drowned trying to cool their bodies and extinguish their burning flesh, is right there. You’ve seen the pictures. Most of the bridges and streets were rebuild right where they’d been before the Bomb. Same for most public buildings. You could see where you were in 2017 and where you would have been in 1945 because they are the same place.

In August, Hiroshima is hot as hell and twice as humid. You can’t really sweat, there’s so much moisture in the air. You feel like you have asthma. But in 2017, you can duck into a McDonald’s not far from the Atomic Dome and absorb as much free air conditioning as you’d like. An American there, or in the Peace Park, is as likely to be ignored as just another tourist as he is to become the target of some nice Japanese person wanting to practice English and lead you around chatting. Have you seen the famous watch, they ask, the one that the atomic bomb froze at the moment of detonation? How about the atomic shadows, the ashes of people photo-flashed to death? You can take pictures, no problem.

But no matter how many truly genuine smiles or how many Big Macs, you can’t get away. Hiroshima is an imperfect place, and one which will not easily allow you to forget the terrible things that preceeded its day of infamy.

Outside of Japan, most people feel the Japanese government has yet to fully acknowledge its aggressiveness in plunging East Asia into war. Indeed, the museum inside the Peace Park has been chastised as focusing almost exclusively on a single day, out of a war that began over a decade earlier and claimed millions of innocent lives before the bomb fell on August 6, 1945. The criticism is particularly sharp, given the rise in militarism occurring under Prime Minister Shinzo Abe. Now, as in decades past, China watches to see what Japan will do with its armed forces.

There is also ongoing friction between Japan and Korea regarding Hiroshima.

An estimated 40,000 Koreans were injured or killed in the atomic blast, most slave laborers kidnapped and brought to work in Hiroshima’s factories. They were the industrial equivalent of the “comfort women,” the Korean sex slaves raped by the Japanese military. The centerpiece of the Peace Park, the Memorial Cenotaph, is the final resting place for the ashes of the bomb’s victims. Japan, however, only allowed those remains believed to be Japanese to be placed in the Memorial. There was of course no way to determine whether a handful of ashes was Japanese or Korean. The Korean dead did not get a marker until the 1980s, and that was laid off to the side, and was paid for by Koreans. Until that time, following Buddhist tradition, the souls of those men and women could not rest.

How deep does hate lie? Or is it actually a shallow grave?

There are others with things to atone for, and much to reconcile. The U.S. remains unrepentant. It was only on the 60th anniversary of the bomb that the first American ambassador came to Hiroshima on an August 6th morning to pay respects. There has never been an apology for the first use of a nuclear weapon, and against a civilian target at that. Ask most Americans about the bombing, and it would be surprising not to hear the phrase “the Japs deserved it.” A few elderly survivors, many with disfiguring burns, still suffer today. Yet there is not enough vengeance for some, even seven decades later.

But perhaps the oddest part of my visits to Hiroshima was always at the end. I simply got on a train, and left it all behind me. Or so I thought each time I tried.