After Jeff Bezos, Everyone in America is Now a Victim 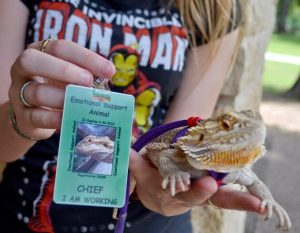 “I didn’t think we’d see this for a few more years, but this Bezos thing put us over the top,” said Department of Homeland Security Director of Victims Ronald Devine, accompanied by his support dog and her personal support kitten.

Devine explained the final holdout were super-wealthy, white, straight, older men, led by Amazon CEO Jeff Bezos. Bezos was once seen by most observers as victim-proof, given his fierce Caucasianess. Yet revelations this week he was not actually a philandering old dude caught sending pathetic nude pics to his younger trophy mistress while still married to the woman who worked beside him for decades while they built Amazon together, shocked a nation.

“Bezos is a victim,” stated every blue-check, which includes all previously designated victim-Millennials. “His phone, we heard from Seth, was hacked by the Russians on orders from Trump because Bezos’ Washington Prime Post writes journalism about Trump, so Trump ordered the Russians to trick Bezos to take photos of mini-Jeff.”

“And that did it,” said DHS Director of Victims Devine. “We had previously categorized only about 50% of the entire population as victims until we looped in all women except Melania, who social media feels sort of deserves it. Then it was the creation of ‘People of Color’ being victims, a super victim smoothie that ties together the whole Pantone scale from a Chinese billionaire to a Dominican guy delivering food.

“Of course black folks were brought in after Black Panther told their origin story, same as Star Wars once did for white people. All immigrants and their grandchildren who write college entrance essays were entitled to victim status for years. Same for Native Americans, though the category now includes all older men who wear overly large turquoise jewelry and bolos.

“We’d already counted all veterans and their grandchildren who write college entrance essays as victims. It once was just those Vietnam guys rocking handlebar mustaches down at the VFW who all needed to blame their drinking problem, their cheating problem, and their buying cars at 21% interest problem on something, but now anyone who did two years as a supply clerk at Fort Hood is in. You don’t need to even show any paperwork anymore; just get a Support the Troops sticker on your car, or, south of the Fairfax County line in Virginia, fly that POW flag in your front yard.

“Most of the rest of Americans — I think it got us into the 90% percentile — made it to be victims when we started adding letters to being gay. In the old days we just had the guys from the drama club at Brett Kavanaugh’s old high school. The category jumped when LGBT became so many letters. LGBTQIA added queer, intersex, and asexual. We also have U for unsure, C for curious, another T for transvestite, TS or 2 for two-spirit persons, P for polyamorous, and O for other. The initialism LGBTTQQIAAP (lesbian, gay, bisexual, transgender, transsexual, queer, questioning, intersex, asexual, ally, pansexual) covered most of California and parts of Austin.

“Another step forward toward 100% victimization was a decision to merge ‘survivors’ and ‘community’ with ‘victims.’ There’s a ton of crossover you know. People who had a suspicious mole removed from their back now qualify as cancer survivors, and everyone that knows them forms a cancer survivor community supporting their struggle, see. And then once you could purchase that kind of thing by typing your credit card number into a GoFundMe, it was like the Big Bang of shared victimhood.

“So really all that was left were super-wealthy, white, straight, older men. We at this office had been keeping an eye on them for some time, and thought they’d made the jump into victim status when Trump claimed avoiding sexually transmitted diseases was ‘his Vietnam.’ But for some reason that didn’t catch. Funny, given how nearly every super-wealthy, white, straight male of his generation would have been under that umbrella alongside those college deferments. Same as that Esquire article about American boys everyone flipped out on. Nonetheless, it is, once again I may add, Jeff Bezos who leads us into the future. Him being the victim, his very privacy lost, brings every single person in America into victim status. We did it, people. There still is that American Dream. This rejects the Trumpian view of the world.

“So effective immediately, some changes. We’ve ordered millions of ‘Do Not Pet’ reflective vests for Americans to wear themselves to avoid unwanted touching at work. Otherwise, no more clothing with words on it. Every pet and most house plants are now officially designated as support animals. No more need to buy those fake ID cards for Rover off Amazon.

“Things are gonna get crazy at the airport, because after the crew boards everyone with a branded credit card and local municipal employees in uniform, 100% of the remaining passengers are going to qualify for preboarding and extra time. We may need to create new, expansive forms of social media. I know one already being tested is called SJWMobster. I can imagine mandatory VLOGs. It’s difficult to see Joe Pesci’s career advancing, but there will be huge opportunities in sensitivity training. And we gotta add about 8000 words to the First Amendment to define hate speech so we can ban it. We can expect ‘raising awareness’ to become the number one major at America’s colleges, and setting up a GoFundMe our fastest growing job title.

“What’s ahead? I think the new frontier in America is going to be celebrities, who have already been victims for a long time owing to the pressures they face earning millions of dollars and having to do drugs, using some of the new victim coaches out there to grow themselves into more varied categories of victimhood. There will be a lot of competition to book those who can tick the boxes in three or more categories.

“We’ll be busy sorting out who we should be boycotting, given the competing victim statuses creating new categories of multiverse victims for nearly every piece of music, literature or film ever made. Here at the Department of Homeland Security we have already created a new sub-ministry of truth that is even now working through everything ever published to unoffend it double-quick. We may just close all the libraries and let Amazon decide what’s safe to read now that all victims finally have a voice.

“With 100% of Americans enjoying victim totalitarianism, somebody is being hurt, retraumatized, triggered or disrespected right now as I speak, maybe just because I am speaking. How will we as a nation deal with that? I mean, it’s not like we can just laugh at all this, right?”