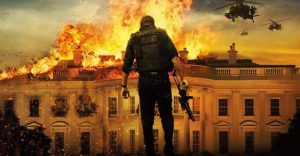 Here’s why the Democrats can’t have nice things. Like the White House.

Though by now the media has awarded Biden all 270 electoral votes and taped a transcript of his debate performance on the national refrigerator door, it is unclear Joe Biden really wants to be president. He barely campaigns and usually ends his working day at noon. Since mid-August Biden logged 22 days where he either didn’t make a public campaign appearance (during the same period Trump visited 19 states.) Biden has slept at home every night of the campaign. He has no signature policy initiative. He often appears overwhelmed. He simply presents his waxy self as the embodiment of the empty and depressing strategy of I’m the Lesser of Two Evils and marks off the days until it will all be over.

The Democratic party itself seems to feel much the same way. After four years of complaining Trump is an old white draft dodging man linked to corruption, the best the Dem process could cough up was an even older white draft dodging man linked to corruption. On a rare Biden visit outside his own yard to Charlotte, North Carolina, local organizers only turned out 16 people to meet the candidate. The chairwoman of the African American caucus only learned of the event from TV. Meanwhile, the party insists on its own demographic illusion. Latinos, key in crucial states like  Arizona and Florida, have shown less support for Biden than for past Democratic nominees, resistant to a campaign defining them as “people of color.” Some 98 percent of Latinos don’t want to be called “Latinx” even as the Democrats continue to do so pandering to the two percent. Ideology over reality, though it may not matter: 38 percent of Hispanic voters Dem imagine they control in battleground states are ambivalent about voting at all. A Telemundo poll shows 68.7 percent believe Trump won the first presidential debate.

The Dems ignore other demographic bad news. In Michigan, Pennsylvania, and Wisconsin net Democratic registrations are down by 38 percent from 2016. More to the point, registration among whites without college degrees is up 46 percent while registration by people of color is up only four percent. Turnout looks to be in trouble as well; in Wisconsin while 79 percent of black voters participated in the 2012 general election, in 2016 it was down to 47 percent. The risk of low turnout is even greater when one factors in age.  About 78 percent of blacks age 60+ are likely to vote, compared to only 29 percent for blacks age 18-29.

Meanwhile, in this final stretch when they should be clawing for every vote, Dems are sending out scattered messages on in-person voting (“You might die of COVID but it’s so important you guys!!!! LOL”) and planning on relying on a 19th century mail in system run by local yokels that works poorly under the best of circumstances. Plan B is to claim the system they told everyone to use didn’t work and the president needs to be selected by Netflix users.

If Democrats really wanted to win some swing states they should have found a way to fix the water in Flint. They might have persuaded Mike Bloomberg instead of buying felons’ votes in Florida to have created the equivalent in new jobs in Ohio. Dems never talked to the voters they needed the most. In fact, quite the opposite. They stomped their feet and held their breath in a four year tantrum and called them racists and haters when unmasked Midwesterners never got appropriately offended by Trump. These people worked hard for what they have only to hear that dismissed as privilege. Dems attack people as much for who they are as what they believe and still expect a vote for Biden.  The NYT calls them “the worst of us.” Call them the missing whites on election day.

Democrats also believe their own self-illusion. Instead of understanding social media as a winnowed, mob-enforced minority of confirmational people, Dem strategists believe it all makes a difference. They came to think listening to podcasts, wearing cute #Resistance gear, retweeting and liking, holding Pink Hat marches and flash mobs, making $25 donations to GoFundMes, signing online petitions before going on Etsy to buy snarky t-shirts about vaginas, forwarding propaganda videos from the Lincoln Project, all while talking about NPR in line at Trader Joe’s, matter. All the devices don’t add up to a single vote. It isn’t a barometer, it’s a mirror.

Voting Dem may just be too much of an ask for thinking people. Review the near-endless emotional hemophilia, hypocrisy, cognitive dissonance, and fake news kudzu a Dem voter is asked to ignore. For example, a Trump rally, or a wedding, is a deadly super-spreader event but a BLM rally is not. Schools and businesses are open or closed at the discretion of governors and mayors but Trump is to blame. Demonstrations which devolve into riots are acceptable but a couple of rednecks open carrying at a statehouse is a precursor to civil war. BLM when the killer is a cop, a lot less so when the killer is a black gang member. The new Supreme Court will limit our rights, except if they extend our 2A rights and then more rights are bad. Kids in cages means Nazism but Biden bringing back the Obama national security advisors who created millions of refugees flowing out of Syria and Libya is no matter. Choosing a Supreme “too close” to an election is the end of democracy but Dems promising revenge by adding states, deep-sixing the Electoral College, and packing the court to jam through their own one party eternal majority is not. A Muslim woman in Congress is revered for her adherence to sexist Islamic doctrine but a Catholic woman who honors her spouse is Handmaid’s Tale in Biblical proportions. #BelieveWomen applies to accusers of Republicans but not Democrats. We must have more women in government, except if they’re Republicans. Andrew Cuomo, governor of New York, claims he will block any FDA-approved COVID vaccine from his state until his own scientists check it out, fearing a dangerous chemical will be released so that Trump can win the election. We must reawaken our democracy but if you vote for a third party you are working for Putin.

When the stock market was soaring it didn’t matter because most people did not own stock yet when it fell during COVID it was the end of the economy but when it recovered it no longer mattered. None of the desperate warnings of war — Iran, China, North Korea, Venezuela, civil war in America — came to be. No one did anything bad after the embassy moved to Jerusalem or the Iranian agreement ended. All the things which were to disappear — the ACA, Roe, LGBT rights, same sex marriage — did not. Martial law was not declared, though the MSM signaled numerous times they would be OK with a military coup to depose Trump. Puerto Rico did not descend into genocide. Trump did not launch nuclear weapons in a fit of psychosis. The Democrats over and over made insta-heroes of miserable people who then had to be disowned like Michael Avenatti, Michael Cohen, Robert Mueller, James Comey, and every former general who was going to flip and tell all but didn’t. I honestly have no idea anymore if Dr. Fauci is seen as a good guy or a bad guy by Dems. The Democratic party claimed insubordination by government officials is to be honored if it is called #Resistance. We needed to see Trump’s taxes bad enough that it was OK someone stole them and even then the NYT won’t let anyone see the actual documents. Pee tape anyone? And in the final months before the election, the principle Democratic strategy is to claim if Trump wins it was all unfair. Update: the Reichstag is still standing.

How can a thinking person look at all that and conclude “these are the people I want running the country.”

Too many readers will see this article as pro-Trump. Where does it praise Trump? And that’s the last point here. Democrats and the MSM (let’s call it MSDNC) have divorced themselves from earth gravity. The rules of their home planet are any criticism of the party means you love Trump, are a hater, racist, Nazi, Russian or a bot. Inquiry is not allowed, so you must accept the Dossier, Russiagate, Ukraine, whatever crazy story is “reported” by “sources” and vote Biden or else.

Maybe if a little introspection had been allowed amid demands for conformity of thought the Democrat party would not be imploring voters to believe the end justifies the means. Maybe they would not have cried wolf again and again until only the true crazies are still listening. Maybe they would have foregone the public humiliation of the Mueller report and the failed impeachment. Maybe they’d be running a candidate that represented, well, something to vote for. Maybe they would not be so worried their voters will stay home on November 3.

If Trump wins again, it will be safe to say Dems lost this election in 2016 when they failed to see the change the nation wanted, pushed Bernie aside, and demanded we coronate Hillary. That gave Trump his first term. But rather than learn anything in the cold morning and seek redemption, the Dems basically did the same thing in 2020, albeit with the more likeable Joe Biden. But Biden carries most of the same old school baggage, inherits the same wounds of the Obama years, and has that lasting taint of corruption after 47 years in government.

Yes, Joe’ll win the popular vote, the Electoral College are racist cheaters, Mrs. Jones’ ballot was lost in Raleigh, PutinPutinPutin, all a rich gumbo but whenever the end of the day comes, Trump will likely have his second term. More because the Democrats lost than because he won.