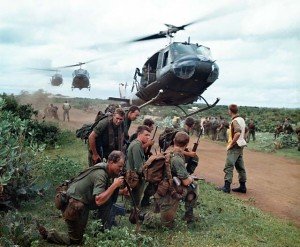 We know what keeps America safe at night — rough men on the walls stand ready to visit violence on those who would do us harm, duh. But what about Canada? Or say, Cambodia or Bolivia?

This is by way of trying to figure out why Joe Biden bombed Syria and derailed the resumption of the Iran nuclear accord, and why he has called off, delayed, or stalled further withdrawals from the places like Afghanistan, Iraq, and Syria along the bloody trail of the old Global War of Terror. Canada (along with Cambodia, Bolivia and most others) never sent any of their rough men to most of those places to begin with, absent Afghanistan where some Canadian forces were deployed until 2014, a long 7 years ago. The peak was only about 2,000 soldiers anyway. Canada maintains a handful of small foreign outposts, mostly to handle logistics. They’re not fighting anyone anywhere.

The U.S. famously has some 800 bases strewn around the globe, with troops in 150 countries, and boasts its special forces during any given week are deployed in 82 nations. Many of those Sneaky Pete’s are killing people in those places without the knowledge of the “host” country. Last year they operated in 72 percent of the nations on this planet, including 13 African nations. Can you name them? Why were Americans risking their lives in Burkina Faso? So we can sleep better?

Few expected much from Joe Biden foreign policy wise, and he has delivered. About a month into office he bombed Syria. The ostensible justification was the target was not “Syrian” but 22 people associated with Iran. Militias in Iraq allegedly under Iran’s control killed an American contractor in Erbil so the bombing in Syria was retaliation for that. This was not only supposed to be a legal, moral, and ethical act by the Home of Democracy (c), it was supposed to have accomplished something toward Americans being safer. It did not; a U.S. airbase in Iraq was rocketed a few days later.

Imagine Chinese aircraft flying halfway around the world and killing 22 people in Detroit in retaliation for something that happened in, wherever, Thailand. That OK? Whatever nations are looking to China for “leadership” (one of the things Biden was to restore after Trump broke it) might not be sure. China is an interesting example, because they did not retaliate against the United States for bombing their embassy in the former Yugoslavia in 1999. As in 1988 when an American cruiser shot down a civilian Iran Air flight, killing all 290 people on board, Washington just said it was a mistake so no retaliation was necessary. The world is encouraged to accept America alone does bad things for good reasons. Or no reason at all. Talk about uniqueness.

If I thought like a Canadian, I would find it difficult to understand why the U.S. has to fight everyone. It is very hard to imagine America has enemies who need killing in 72 percent of the nations on earth. Or maybe not — after decades of invading, bombing, and regime changing, maybe they really do hate us. The relationship between the U.S. bombing people and people not caring for the U.S. seems unclear to Joe Biden and most of his predecessors, however.

Thinking like an American, the ostensible reason for all this bombing seems to be Hitler. He’s why we couldn’t support Trump’s nuclear diplomacy with North Korea and no other president has even tried for 20 years, and why Biden seems reluctant to revive the Iran nuclear accord. In 1938 olde timey British Prime Minister Neville Chamberlain got hoodwinked by Hitler. No American president wants to be Neville Chamberlain. So every bad guy in the world, whether Slobo Milosevic, Saddam Hussein, Kim Jong Un, Vladimir Putin, Muammar Gaddafi, Bashar Assad, the cabal that runs Iran, Hugo Chavez, Castro even dead, is Hitler.

It follows every friction point is Munich 1938 and the only way to deal with it without appearing Chamberlain-level weak is to attack just one more country. When actual fighting cannot be on the table, presidents are content with crippling sanctions, a kind of economic Guantanamo, as have been in place against Cuba since about when the Beatles first came to America, before that with North Korea, and since roller disco was popular in the case of Iran.

It works for us, at least as far as politicians are concerned. They don’t look like Neville Chamberlain. They hardly ever suffer any consequences. There is absolutely no demanding of accountability (the new Washington watch word) for any act of war committed by any American president, including those who lied about weapons of mass destruction in Iraq and created a global torture system the actual Hitler would have been happy to have franchised. Foreign policy in general is not a constraint on policymakers, because most of the public doesn’t care about it (quick, find Burkina Faso on a map.) Those that do care usually are pretty supportive of America’s wars, love the troops and all that. Washington and the media help out, spending most of a decade messaging “we have to be at war” post-9/11 for example, and that poo stain doesn’t wash out easy. The thing that finally turned the country against the Vietnam War, the draft of nice white middle class kids, is gone. Also gone are the waves of body bags, as much of modern killing is death from way above.

The other reasons Joe Biden bombed Syria are equally familiar and equally false. We have backed away from “we need to protect the oil” since the first Bush Gulf War in 1991 though the phrase had a good run. Still out there is some version of “fight them over there so we don’t have to fight them over here.” No one has invaded the U.S. since 1812, and when push came to shove on 9/11 a bunch of guys with box cutters worked around the $305.4 billion 2001 military budget. People on the left used to talk about “The American Empire” but even that has turned out to be pretty weak; we don’t imperially profit by raping conquered lands as a proper empire does. Where is our Raj? Our Opium War? Our rubber plantations and breadfruit farms? America got no oil from Iraq and no minerals from Afghanistan.

We instead mostly wreck places (Libya and Vietnam come to mind) and then abandon them, or grab a little land for yet another overseas base. Americans sometimes talk like it’s all a great game of Risk, but war to simply grab resources and territory isn’t how things have worked for a long time. Other justifications? Ask any still living Iraqi how “spreading democracy” worked out. Stopping various genocides comes up from time to time, though when a real one came along in Rwanda the U.S. wasn’t up for it. And, oh yeah, Biden is the leader of the free world. Was there a vote, because if so it’s likely Andrea Merkel would have won. Did American get tasked by all other good countries to protect them, as if Canada couldn’t build a nuke if it wanted one and who is threatening them anyway? The Canadian military could invade Burkina Faso if they wished to. They just don’t wish to.

The fall back justification since 1945 has been the myth that the U.S. is engaged in some global muscle-tussle to be the most powerfulist place. It used to be just Russia, but lately China seems to be the one we imagine challenging us everywhere while still owning the largest foreign share of American debt and making nearly everything sold in our stores. When was the last time China shot at us, never mind invaded us? Some may even remember we already defeated globalist Russia once before (Google “the Cold War, we won.”)

Military spending does absorb over half of the federal government’s discretionary budget, meaning more money is spent on the Pentagon than on schools, infrastructure, climate, research, and diplomacy combined, so that may also have something to do with all this. Fun fact: in addition to leading the world in bombing, America is also the leading global arms dealer.

Most of Joe Biden’s foreign policy team are brutalist left-overs from the Obama administration, the one that invaded Libya and set the ball rolling in Syria and Ukraine. They’re needed in 2021 about as much as mimes at a funeral. Head of the gang is Victoria Nuland, who worked to start her own war in Ukraine a few years ago. Supporting her are Tony “Global Policeman” Blinken and Susan Rice, she of invading Libya fame.  Maybe they and the others of the Class of 2016 will finally have those full-on wars  have always wanted but a stronger president like Obama sort of resisted. Bloody Nuland says more wars are basically a requirement. She co-wrote an article titled “Superpowers Don’t Get To Retire,” proclaiming “there is no democratic superpower waiting in the wings to save the world if this democratic superpower falters.” With policy friends like this, it’s clear why Biden bombed Syria and will do more of that kind of thing as opportunities arise.